With racism dominating the headlines (or at least sharing equal billing with COVID-19), people are scrutinizing the treatment of Blacks and people of color in all professions. The health care industry isn’t immune to racism, though it often goes unrecognized. 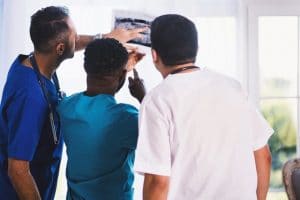 Health care professionals are universally committed to improving the quality of care for their patients, but they rarely address the systemic issue of racism. Many aren’t even aware of these biases, but even doctors and nurses—the very people who have taken oaths to help patients—are often guilty of racial bias, even if it’s unintentional. The fact is, health care providers are human, and as such, subject to the same levels of bias as the general population.

Studies have shown that, when two people come into a doctor’s office displaying the same signs and symptoms, when one individual is white and the other Black, the white person is likely to receive preferential treatment. Unfortunately, this gives credence to the assertion that not all patients are being treated equally.

A study in the New England Journal of Medicine, published in 1999, found that doctors were less likely to offer referrals for necessary heart treatment to patients who were female or Black. Another study conducted almost 20 years later indicated that persistent sex and race-based disparities with respect to heart treatment continued; Black patients remained less likely to have a heart specialist assigned to them or an intervention performed to evaluate the blood supply to their hearts. Blacks are already at a disadvantage give their higher death rates for eight of the 13 leading causes of death.

The problem is often linked to implicit bias—the unconscious assigning of certain qualities to specific social groups or classes. A study at four academic medical institutions across the U.S. showed that even though the majority of physicians self-reported no preferences for white vs. Black patients, when administered an implicit bias test, those same health care workers were found to demonstrate a preference for white patients while displaying negative perceptions of Black patients, factors that directly affected patient treatment protocols.

What can we do to correct this injustice?

To start, the industry should make implicit bias training for all health care workers mandatory. California has already enacted legislation requiring implicit bias training for some physicians; expanding this practice to all health care workers and making it a required component of their medical certification would be a positive first step in helping to eradicate racial bias.

Changing attitudes and perceptions won’t happen overnight, but it’s worth the effort. The time is ripe for change, and we’re seeing through ongoing protests across the country—and around the world—that society is less willing than ever to turn a blind eye to racial bias. The health care industry can take the lead and set a positive example.