With so many people working from home during the coronavirus pandemic, the internet is more important than ever. Reliable access is essential not only for performing jobs, but for communicating with distant coworkers and accessing resources. Unfortunately, some people live in areas where internet access isn’t very dependable. 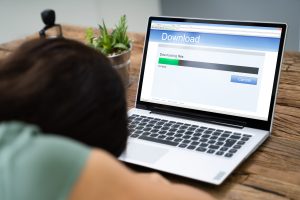 In certain areas, employees working from home have been contending with unreliable internet access resulting in poor download speeds, frequent disconnections, and frozen screens—particularly when engaging in data-heavy tasks such as videoconferencing. Even under the best of circumstances, so much added strain on the system can lead to problems.

According to the Federal Communications Commission (FCC), approximately 21.3 million people in the U.S. do not have access to broadband connection speeds of at least 25 megabits per second—the definition of high-speed broadband internet. That number might actually be low; some independent sites estimate the number of Americans without broadband access could be double the FCC’s estimate. This is especially true in more rural areas, though even big cities are not immune. The percentage of households with broadband access in Philadelphia is 71.6 percent, second lowest in the nation’s 25 largest cities and significantly below the national broadband penetration rate of 83.5 percent. When you consider the large number of people working from home in the Philadelphia area and surrounding communities, this spells trouble for some.

If your employees lack access to broadband connections, one solution might involve hotspot devices. Often, people who live in areas with poor broadband service can use their phones to power their laptops. Companies then reimburse them for data charges. But these are only effective if wireless carriers have an adequate number of cell towers and the built-in infrastructure to handle the demand…and not all phones are equipped to perform this function.

The longer the pandemic lasts, the more help remote workers are going to need. The Coronavirus Aid, Relief and Economic Security (CARES) Act, signed into law on March 27, allocates millions of dollars toward broadband services in rural and underserved areas. In the meantime, the FCC is urging broadband and phone providers to be lenient with small business customers who are having difficulty paying their bills, and encouraging them to open wi-fi hot spots to any American who needs them.