By now, you’ve probably seen the viral “OK, boomer” memes that have pitted Millennials against Baby Boomers in a clash between generations. It’s a dismissive way of telling older adults their ideas are outdated. While some maintain it’s nothing more than a little good-natured ribbing, others equate the phrase to an insult along the lines of a racial slur.

Age and the Workplace 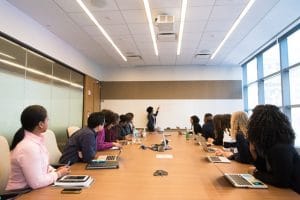 Cross-generational insults are hardly new. Aging adults are often viewed as being “out of touch” by younger people. As social mores change, views that were once commonplace on topics such politics and religion can begin to feel antiquated. It’s a natural cycle, one that today’s Millennials will experience in a couple of decades as they, too, reach middle age and beyond. It wasn’t all that long ago when Generation X were labeled as “slackers.” But that doesn’t make it right, and some, such as AARP, think this latest round takes things too far.

The issue of age in the workplace is particularly tricky. Other than within families, work is where people of different generations interact the most. Because people are living longer and working beyond age 65—the previous traditional age for retirement—today’s workforce now spans five generations, from the Silent Generation (workers in their 70s and 80s) to Generation Z (in their 20s). Likewise, social issues are likely to creep up at work, with sensitive topics taking center stage. These can lead to uncomfortable conversations that might even become heated. Even exchanges that were once viewed as innocent—an older man complimenting a younger woman on how well she looks, for instance—have taken on a whole new subtext thanks to the #MeToo movement. The gender-neutral movement has proven particularly challenging when it comes to bridging the gap between older and younger workers. Baby Boomers might not understand or agree with the idea, but they need to acknowledge the shift in attitudes and let the leaders of tomorrow take charge; otherwise, they will continue to clash. Older workers may be called stubborn and out of touch, and younger ones who poke fun at them are often labeled as ageist. It’s a situation in which there are no winners.

And yet, Susan Weinstock, the vice president of AARP, says research shows that employees of all ages generally enjoy working together. It’s possible that social media may be more to blame for initiating the “OK, Boomer” feud than any actual animosity between generations.

Regardless, it’s in everybody’s best interest to put aside differences and not dismiss one another due to age—whether young or old, both generations bring value to an organization and should never be judged on stereotypes alone.